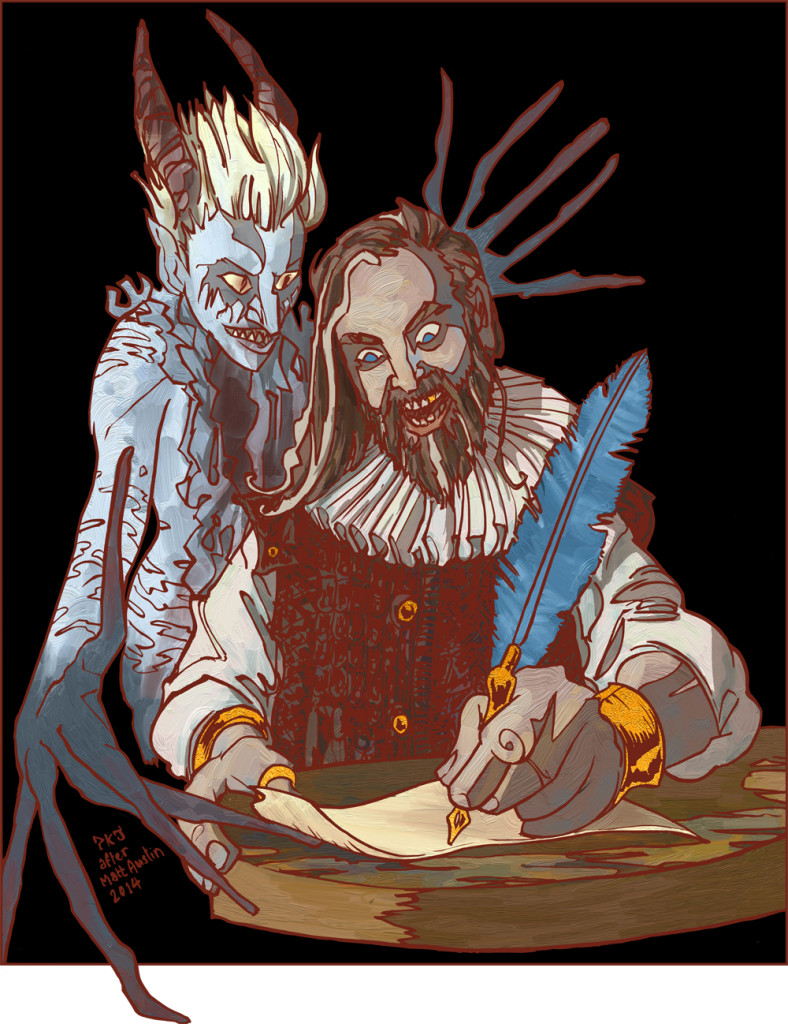 In late 2014 and early 2015, Four of Swords explored new territory with a kind of spin-off/quasi-sequel to their hit Hallowe’en adaptation of Christopher Marlowe’s DOCTOR FAUSTUS, entitled DOCTOR FAUSTUS PRESENTS AN EVENING OF RENAISSANCE MAGIC.

The show was performed at  THE DEVON & EXETER INSTITUTION, and the premise was simple: centuries after the events of Marlowe’s seminal work, Doctor Faustus has impressed Lucifer and been permitted an evening of reprieve from hellish torment in order to impress a new generation of scholars with his magical powers.

The show incorporated speeches from Marlowe’s version with ideas and elements from Marlowe’s source, THE FAUST BOOK, its sequel THE WAGNER BOOK, and various other alchemical and occult tomes. It employed science experiments, spooky stagecraft and interactive magic tricks. Oh yes, and a rap about the nine spheres of the universe.

There are no current plans to revise this production, but…

EMAIL SARAH@FOUR-OF-SWORDS.COM TO JOIN THE MAILING LIST
& REMAIN UP TO DATE WITH ALL FOUR OF SWORDS NEWS

Few would contemplate – let alone attempt – a Doctor Faustus spin-off in the form of a cabaret-style magic show, yet Four of Swords pulled it off with trademark wit and inventiveness. Being in the audience for one of their shows is less like going to see a play and more like taking a surreal break from reality!
Gordon Richardson, Express & Echo

I felt completely immersed in the shadowy world of Faustus and Wagner and it was a bit of shock entering back into the real world at the end!  I find you all such mesmerizing performers and I really am not easily pleased.
Audience feedback

Another innovative production from the small crew of actors & actresses. We were sucked in and absorbed by the atmosphere and quality of the production once again.
Audience feedback