JASON & THE ARGONAUTS WORKSHOPS FOR CHILDREN!

Four of Swords’ latest show is JASON & THE ARGONAUTS, due to be performed from 25th May to the 6th June as part of Exmouth Festival. In collaboration with Exmouth Town Council, Four of Swords will be staging two fun and informative workshop sessions for kids at Exmouth library.

FOUR OF SWORDS previously ran a workshop for children to tie in with its production of DOCTOR FAUSTUS last year.

Footage of the workshop was included on the EXETREME IMAGINATION documentary which can be seen here:

FOUR OF SWORDS co-founder Phil worked as a teacher of English and Drama at Secondary School level for six years, and his colleague Sarah has no problem empathising with what it’s like to be a petulant teenager. Er, I mean, she’s also an experienced workshop practitioner!

Normally accompanied by one of FOUR OF SWORDS’ supporting staff of supremely talented musicians, Sarah and Phil have now visited a range of schools in the South West, including two of the largest secondary schools in Exeter: St Peter’s and Isca Academy.

We have now performed to 1,000 students in total and we have complemented many of our performances with student workshops. Visits focusing on GCSE texts MACBETH and JEKYLL & HYDE have proven to be especially popular. St Peter’s, Isca and also Brymore Academy in Taunton and St Katherine’s in Bristol have all rebooked us for multiple visits so we must be doing something right!

“The children felt very special to have their own performance…
I won’t forget the horrified delight on their faces.”
Teacher feedback, Clyst Vale Community College

“It has improved my understanding of the story immensely and I have many positive thoughts on old English literature and language after watching your play.”
Year 9 student feedback 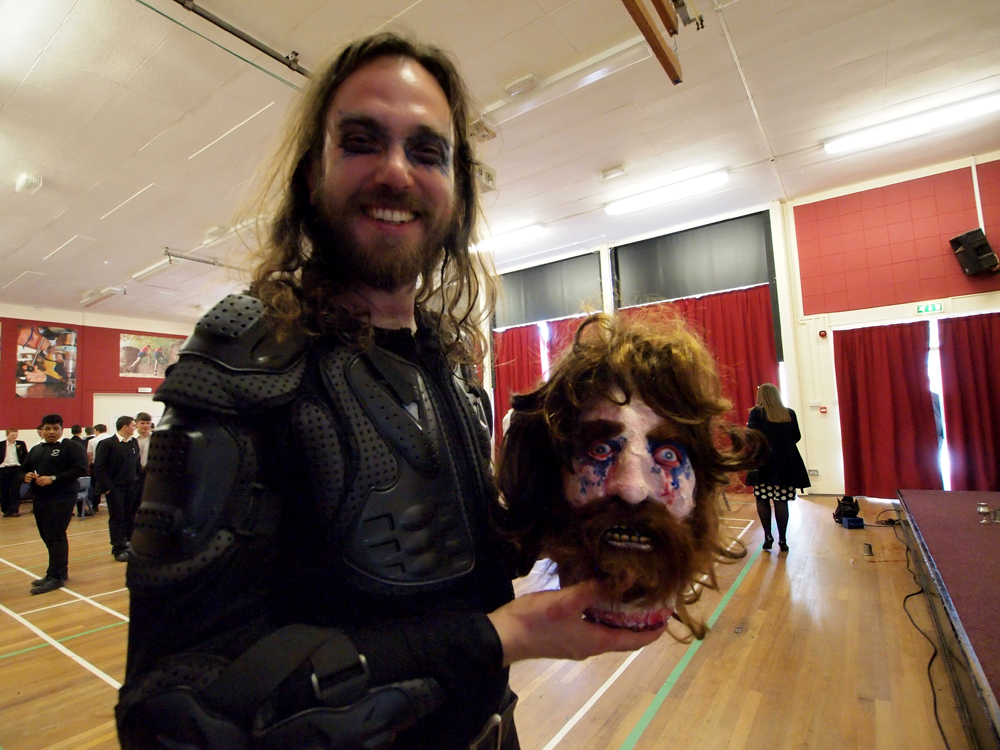 BOOK FOUR OF SWORDS
TO VISIT MY SCHOOL?

A trio of Four of Swords performers would be delighted to come to your school to perform a specially-prepared-for-schools version of MACBETH or JEKYLL & HYDE.

These version are designed to be just under an hour in length and therefore fit inside a single school period. If you were interested in a different story from our repertoire [GAWAIN & THE GREEN KNIGHT or DOCTOR FAUSTUS], then this could be arranged but might need more than three performers and would therefore be more expensive.

We also offer workshops to accompany our performances. These workshops explore themes and/or characters in the story [informed by your school’s requirements] and conclude with a plenary session wrapping the whole thing up. In these plenaries we’ve found that the opportunity for students to act alongside, write for or direct our performers has greatly improved their understanding, confidence and enjoyment of the texts.

As part of the “Re-Writing Futures” strand of the EXETREME IMAGINATION festival, FOUR OF SWORDS collaborated with students from the Central Devon Personalised Learning Service for young people who have been excluded from mainstream education. The outcome of the project was two short films which were then projected as part of our production of Marlowe’s DOCTOR FAUSTUS.

Sarah and Phil managed to encourage and motivate extremely challenging pupils.  I have been so impressed with their materials, session content and presentation.  Pupils expressed how ‘inspired’ they have been and all said it has been the highlight of their time at the Centre. This has certainly been the best project that I have worked with in school and I have been working as a teacher since 1983!!!
Teacher feedback, CDPLS

The students were thrilled to see themselves incorporated into our performance, and to witness their work valued in this way. Equally for us it was an extremely rewarding project to be a part of. You can see the resultant films here:

After having impressed with one of our schools performances of MACBETH, FOUR OF SWORDS was approached to participate in a pilot project to develop online video resources to accompany the teaching of GCSE texts. We collaborated closely on the design of the MACBETH and JEKYLL & HYDE components as well as appearing in the resultant films.

Last year, FOUR OF SWORDS co-founder Sarah was involved as a freelancer in COLOURBURN‘s Film Summer School, which involved thirty students in the production of a short horror film THE SQWEAKENING. This year, FOUR OF SWORDS has been co-opted as full partner to bring our educational expertise to bear on the project. It’s early days but there will be more information available soon.

Outside of a school environment, FOUR OF SWORDS has so-far organised and conducted a single workshop which was tied to their production of DOCTOR FAUSTUS. This was created and run as part of the “Re-Writing Futures” strand of Exeter’s EXETREME IMAGINATION festival. The workshop took place at ST NICHOLAS PRIORY and explored useful stage and storytelling techniques for the telling of blood-soaked, spooky tales!

Footage of the workshop was included on the EXETREME IMAGINATION documentary which can be seen here:

Further workshops have already been booked to support our next project which will be formally announced shortly. 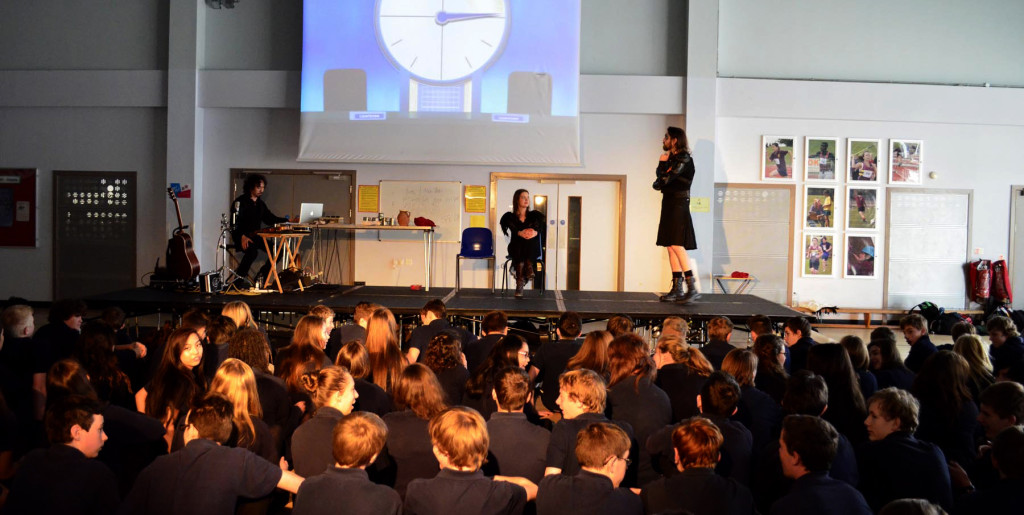